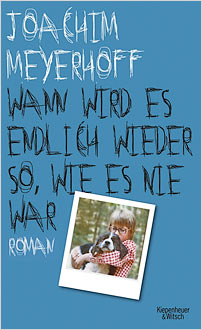 What would it be like to grow up surrounded by people who are clinically insane? The narrator of Meyerhoff’s extraordinary book spends his childhood in the grounds of a psychiatric hospital where his father is the director. The patients are part of the family’s daily life and the tragi-comic depictions of mental illness are both realistic and sympathetic.

As the youngest of three brothers, Joachim battles for his parents’ attention, while fighting constantly with his brothers. He hero-worships his father; a kind, fat, obsessive reader who becomes fixated on ideas and has a benign but distant relationship with his family. The patients at the hospital are all children or young adults, and range from those with severe obsessive compulsive disorder and anorexia, to being extremely violent or having psychosexual issues, to patients with multiple physical and mental disabilities. Perhaps unsurprisingly, Joachim is continually plagued with worries about his own mental health and behavioural problems. At the close of the novel, after their father has died following a long, solitary illness, Joachim and his eldest brother visit the secret house their father had with a mistress they never knew about, and go to their old house which is now part of the hospital.

The novel’s short chapters hint at an ominous future and imbue Meyerhoff’s writing with an atmosphere of suspense, while the vivid descriptions confer an arresting beauty upon everyday scenes. The young Joachim’s fixation on the colour yellow-orange as a sign of something, his longing to hear the customary orchestra of screams whenever he sleeps away from home, and a visitor ‘growing and growing’ as he gets out of his car, all give his writing a touch of magic realism.

While the experiences of sibling rivalry, parental acceptance and inner turmoil raised by the novel are universal, the setting in the psychiatric hospital brings a fascinating and unpredictable dimension to this story. Unlike many of the famous works of literature treating mental illness, here we see things from the less common – and highly comical – perspective of someone living in that world who is ‘sane’. Meyerhoff’s narrator explores his family’s and the patients’ wonderful idiosyncrasies, developing considerable insight into the still-taboo issue of the fine line between sanity and insanity.

Joachim Meyerhoff was born in 1967 and has been a member of the Viennese Burgtheater Ensemble since 2005. He was invited to appear at the Theatertreffen 2009 with his six-part cycle Alle Toten fliegen hoch, which also formed the basis for his latest novel. In 2007 he was elected actor of the year. For his debut novel Alle Toten fliegen hoch: Amerika, he was awarded the Franz-Tumler Literature Prize 2011 and the Bremen Literature Prize Advancement Award.