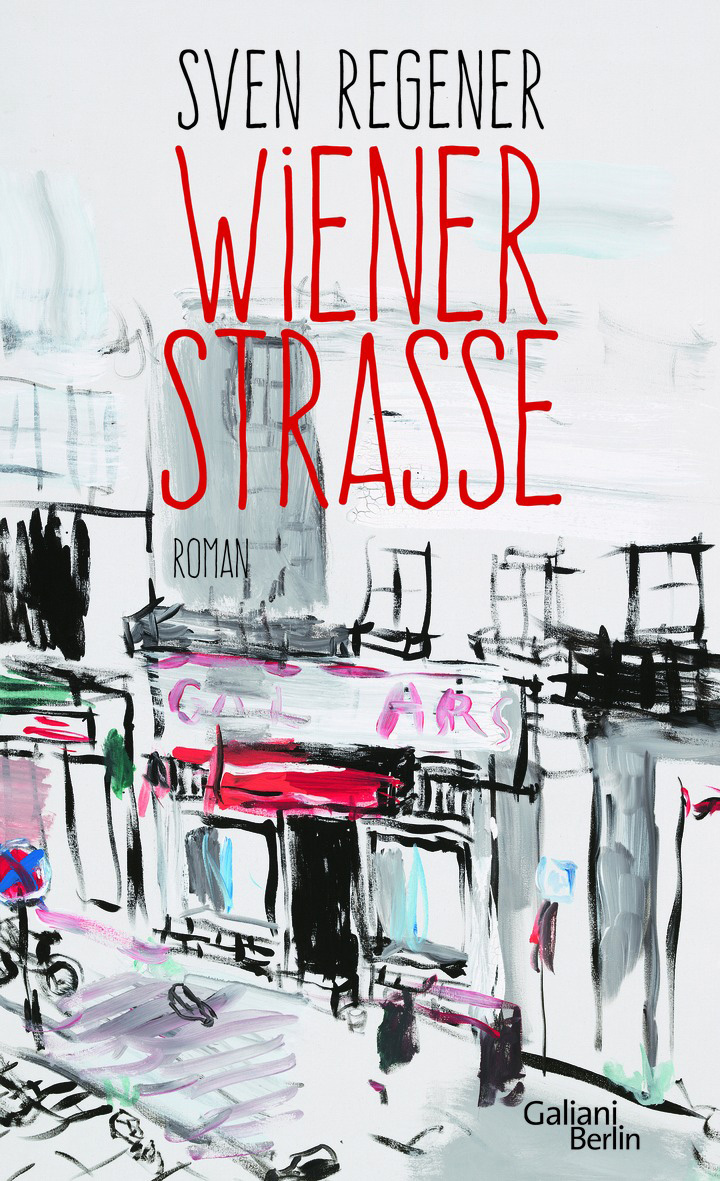 Sven Regener’s debut Herr Lehmann (Berlin Blues) sold over one million copies in his native Germany and was translated into numerous languages including English. In Wiener Strasse Regener continues his hilarious portrayal of West-Berlin sub-culture during the 1980s.

This boisterous book is set in the Kreuzberg area of Berlin, famous for its distinctive counterculture forged in a creative melting pot of immigrants, artists, anarchists, squatters and punks. The  pursuit of art and ‘the next big thing’ is the ostensible goal of the colourful group of friends and acquaintances at the centre of Regener’s novel.

Wiener Strasse opens on a November day in 1980, when Frank Lehmann (familiar to readers from previous Regener books) is living in a flat-share with a rebellious young woman named Chrissie and two performance artists, Karl Schmidt and H.R. Ledigt. The flat is located above Café Einfall, where various characters from the local scene can regularly be found. The chaotic, rag-tag group of artists are busy planning various types of action art. In one typically bizarre episode the artist H.R. Ledigt goes to the hardware shop in search of a chainsaw. Initially  distracted by a very nice garden fork, he roams around the shop encountering various other customers. Misunderstandings arise and the situation escalates to the point that H.R. brandishes the fork at the salesman, demanding all three of the available chainsaws.

The action art culminates in the opening of a ‘New New National Gallery’ at which one of the group tries to make off with a tree trunk, but is stopped by a neighbourhood policeman on his beat. The cop is outnumbered and calls for reinforcements. Many of the pretentious artist types are carted away, while Frank Lehmann makes it back to the café with some cheap wine. There he encounters a few more characters who got away. The night is still young and ripe for further escapades.

Wiener Strasse amusingly weaves together a convoluted cast of extravagant characters in and around the artist, squatter and punk scenes in 1980s Kreuzberg. The hectic, madcap storyline is often replicated by breathless, long sentences, short, episodic narrative sections and shifts in location ranging from the hardware shop to the seedy Café Einfall and various shared flats. Regener’s distinctive literary style and laugh-out-loud hilarity cement the appeal of this wildly compelling novel.

Sven Regener is a singer, trumpet player and lyricist for the band Element of Crime, as well as a brilliant writer. In 2001 he published his first novel, Herr Lehmann (Berlin Blues), which immediately won huge success. He followed it up with the novels Neue Vahr Süd (2004), Der kleine Bruder (2008), and Magical Mystery oder die Rückkehr des Karl Schmidt (2013).