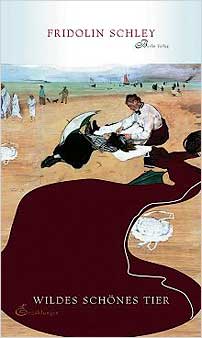 All six of these short stories are fine examples of their genre, and would appeal to any reader who appreciates really fine writing. The first of them, Landerhebung, develops the idea of a fight-back by nature against the city. Vegetation has gradually taken over the bus stops and everything becomes clogged and slowed down, even the narrator’s memories of his girlfriend. The remaining five offerings are constructed, in an equally original and almost hypnotic way, around famous works of literature, architecture and art.

In Unannehmlichkeiten durch Liebe (‘Troubles of Love’), a young publisher comes across an unsolicited manuscript about a man who kidnaps his own wife in the hope that the Stendhal syndrome will come into play and make her fall in love with him again. Das Herz der Republik, as its name implies, is set in the now semi-derelict, asbestosfilled and grandly-called East German Palace of the Republic, once the architectural triumph of the GDR. The narrator’s father, who was one of the building’s chief architects, has recently died. His heart appeared to recover, then unexpectedly stopped beating. Could this, the reader is prompted to wonder, be some sort of allegory for the GDR itself?

Stendhal, Stockholm again links extreme involvement in art with physical and mental collapse. A young German tourist accidentally wanders into a freemason temple in London, where he meets an old man, also a German, who insists on telling him his life story before showing him the way out. It transpires that, betrayed by his Nazified pupils during the Second World War, he was only saved from execution because he was painting a portrait of the prison doctor’s son. To ward off his fate, he painted layer after layer onto the canvas, but years later collapsed after the discovery of a hidden figure under the surface of a Degas painting.

With two other stories, one referring back to Manet’s painting ‘The Balcony’, the other concerned with a group of family films revealing a secret which the school-leaver /editor is determined to expose, we are presented with a set the hallmark of which is the experience of someone (in all these cases a young man) who is exterior to, yet emotionally involved in, the main action. A collection of hauntingly accessible appeal.

Fridolin Schley was born in Munich in 1976. He studied at the German Film and Television Academy in Munich as well as reading German, politics and philosophy at university there and in Berlin. He has won the Bavarian State Scholarship among other prizes and was invited to participate in the 2007 Bachmann Competition in Klagenfurt.

Berlin Verlag was founded in 1995 as an independent publishing house. It publishes literary fiction and quality non-fiction for a wide audience and a select range of international authors. Berlin Verlag is also known for its work in developing promising young German writers, such as the acclaimed Ingo Schulze, Elke Schmitter, Irina Liebmann, Marcus Braun and Gila Lustiger as well as publishing the plays of Elfriede Jelinek, Nobel prize-winner in 2004. Since 2003, Berlin Verlag has belonged to the Bloomsbury Publishing group. After the successful launch of the children’s books list, Bloomsbury Kinder- & Jugendbücher, in 2003, a new imprint, Bloomsbury Berlin (headed by the Number One Spiegel bestseller, Schott’s Original Miscellany) marks its second phase of new developments.