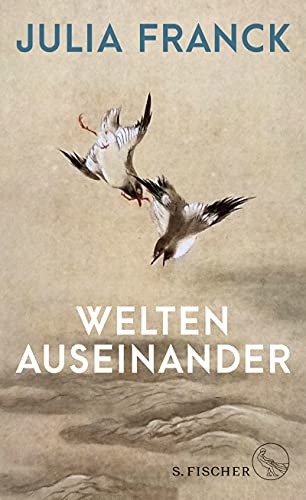 Written in a clear and sophisticated style, Worlds Apart by Julia Franck is an immediate and engaging read, chronicling the lives of four generations of German women over the course of the twentieth century.

The story is told by Julia, who interweaves her childhood and coming of age with the lives of the other women in her family. There’s her Jewish great grandmother, Lotte, once a dashing young woman, who survived the Nazi period thanks to the efforts of her husband; her grandmother, Inge, an artist who chose to move to East Germany and is rumoured to have worked for the Stasi; her mother, Anna, an unconventional actress; and her aunt Rosita. Never a fan of the communist regime, Rosita managed to leave the GDR and build up a successful career in the West. All extravagant characters in their own ways, their lives serve as vivid touchstones as Julia seeks to define her own identity.

Born in East Germany, Julia and her twin sister have two other siblings, both from different fathers. When the twins are eight, the family flees to a refugee centre in the West, but Julia leaves her family aged thirteen to move to West Berlin. Once there, she searches for her father and his family, only to encounter anger and regret. She is not close to her mother any more either, hearing from her only every couple of months.

Julia lives with friends, goes to school and combines her studies with cleaning jobs. She is awkward around her schoolmates, who come (she thinks) from “proper” families. One such pupil is Stephan, the son of wealthy and traditional parents – but he and Julia nonetheless form a strong bond, and he is the first boy she falls in love with. He wants to become a writer, while she wants to be a lawyer. Whereas Julia struggles with the past, Stephan’s anxiety stems from a fear of disappointing his family.

The novel rejects a chronological structure in favour of a satisfying and tightly knit cyclical approach, opening with the blossoming relationship between Stephan and Julia, and ending with the car crash. With its well-rounded characters and vivid storytelling, Worlds Apart will appeal to fans of Elif Shafak’s The Bastard of Istanbul and Żanna Słoniowska’s The House with the Stained-Glass Window.

Julia Franck, born in Berlin in 1970, studied Pre-Columbian studies, philosophy and German literature. She has published numerous books since 1997, including Liebediener (1999) and Bauchlandung (2000). She was a resident at the Villa Massimo in Rome in 2005. Her novel Die Mittagsfrau won the German Book Prize in 2007 and has been translated into forty languages. Her most recent book Rücken an Rücken (2011, Back to Back) was nominated for the Independent Foreign Fiction Prize. Lagerfeuer was adapted for the cinema.