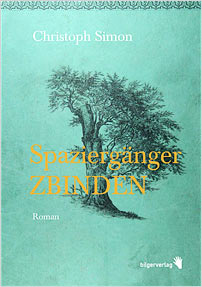 A humane, wise and witty book, Zbinden the Walker defies categorisation but invites reading and re-reading.

Set in an old people’s home, the narrative is effectively an inner monologue, spoken by a resident of the home, Lukas Zbinden. He is making the strenuous walk down the stairs of the home on the arm of Kâzim, a young man assigned to the home for his spell of community service. Zbinden, now in his eighties, reflects on his life, past and present, and on his family, and introduces Kâzim to the other residents they meet on their way.

Little by little we learn the story of his life, his career as a schoolteacher and his long marriage to his beloved and now-deceased Emilie. As a teacher he was unconventional, believing that the purpose of education is to learn how to get on with other people, and that practical experience trumps book learning. But, as the title intimates, walking is the theme on which the whole narrative is hung. For Lukas and Emilie, walking is not just the healthy option: it is the meaning of life. Walking is a process of developing one’s awareness of the world, and of becoming self-aware, becoming properly and fully human. Walking is the antidote to the rat-race. And great discoveries have been made by scientists and artists while they were out walking, we are reminded.

The entire book is a gentle meditation on what it means to live a good life. Deploring the competitive nature of modern life, Lukas asks of his granddaughter: ‘Why should she sacrifice her youth to attain wealth, only to spend her wealth trying to stay young?’. The other residents are shrewdly but indulgently observed, often to hilarious effect. Of Frau Jacobs, a former film actress in her late eighties who now lives in the home, he observes that she doesn’t like being recognised in the street, but even less does she like not being recognised in the street.

Human nature is observed with humour and affection as the writer’s thoughts switch from one subject to the next, just as things occur to him. Several pages are devoted to the pursuit of the married Emilie by an admirer whom she had met on a bird-watching course. He boldly comes to their home to press his suit, and Lukas notes Emilie’s gracious smile – ‘not at all the kind of smile you give to Vogelbeobachtungskursbekanntschaften [“people one has met on a bird-watching course”]’. Irresistible.

Christoph Simon was born in 1972 in Langnau. He attended secondary school in Thun, and then studied jazz at a music school in Bern, where he now lives. In 2001 he published his first novel, Franz oder Warum Antilopen nebeneinander laufen, which has sold over 10,000 copies. Following this success, he published Luna Lena and Planet Obirst, which continues the story of the central character in his first novel, Franz Obrist. This novel won Simon the 2006 Canton of Bern Literature Prize, and a place on the Ingeborg Bachmann selection committee.

Bilgerverlag was founded in 2001 by Ricco Bilger and specialises in contemporary Swiss literature. Authors include Katharina Faber, Urs Augstburger, Kaspar Schnetzler, Urs Mannhart, and Christoph Simon. Ricco Bilger opened his Zurich bookshop in 1983, and ten years later, another bookshop in the mountain spa town of Leukerbad, where he went on to found the successful Leukerbad Literature Festival. In 2007 Bilger was the driving force behind the formation of SWIPS, the forum for Swiss Independent Publishers.