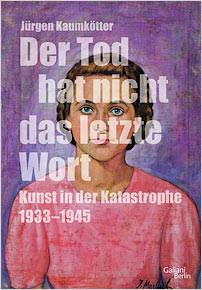 And Death shall have no Dominion is a captivating book which makes an important contribution to the discussion of Holocaust art. Jürgen Kaumkötter considers artists working in the concentration camps as well as post-war artists producing Holocaust art and public memorials to the Holocaust. The artworks come from every possible medium, ranging from rough sketches to accomplished paintings, from cartoons to sculptures and carvings.

Alongside the discussion of the artworks themselves are a range of other fascinating historical documents, including letters, diaries, photographs, camp documents and trial protocols. These materials furnish the reader with chilling insights into the extraordinary sufferings of those who survived the concentration camps and of the millions who were murdered.

And Death shall have no Dominion will find a wide international audience. As well as being accessible it presents a great deal of fascinating and little-known material, and furthers the debate about the relationship between art and human suffering. This book makes a naïve view of the Holocaust, and a naïve reaction to it, almost impossible and deserves to be translated soon.

Jürgen Kaumkötter was born in 1969 and is an art historian and historian specialising in the works of exiled artists and Holocaust art. He has curated numerous renowned exhibitions, including ‘Die verbrannten Dichter. Zwischen Himmel und Hölle 1918-1989’ (The Burned Poets. Heaven and Hell 1918-1989), ‘Die Unsterblichkeit der Sterne. Von Francisco de Goya über Walter Benjamin zu Václav Havel’ (The Immortality of the Stars. From Francisco de Goya to Walter Benjamin and Václav Havel), and ‘Kunst in Auschwitz 1940-1945’ (Art in Auschwitz 1940- 1945). Jürgen Kaumkötter has written many academic papers on the subject and spent more than fifteen years conducting research for this latest exhibition and book.