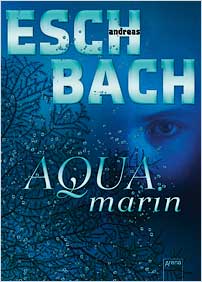 The year is 2151 and sixteen-year-old Saha Leeds is an outsider in ocean-loving Seahaven because a strange injury prevents her from learning to swim. Seahaven, located in what used to be Western Australia, is ruled by the conservative neotraditionalists. Whereas in other areas people wear outlandish synthetic clothing and have embraced genetic modifications and sense-enhancing drugs, these sorts of innovations are banned in Seahaven. Saha, who lost her mother when she was very young, lives with her Aunt Mildred in a deprived area of the town.

Saha’s mysterious injury consists of what appears to be three fragile scars running down each side of her body. The scars must not get wet and she has to cover them with bandages every day. She has been told that they were caused by an accident with a gardening robot when she was very young. But when Saha is pushed into the school pond by a group of bullies – led by the daughter of Seahaven’s most powerful family, Carilja Thawte – she does not drown, and Saha suspects that her body holds a secret.

When Saha finally dares to enter the water again she discovers that she can not only swim but also breathe underwater. Her scars are in fact gills! Elated by her newfound underwater freedom, Saha starts to investigate her mother’s life. She finds out that her father was a human submarine who could live and breathe underwater – part of a race born of experiments carried out hundreds of years ago by a Korean scientist. Saha then encounters a submarine herself, a young man with gills like her own known as ‘Swim-Fast’, who saves her life when she is about to be attacked by a shark. She uncovers a plot to eradicate the submarines, spearheaded by Carilja Thawte’s father, a staunch neotraditionalist and founder of the immensely successful Thawte Industries. He falsely believes that the submarines pose a threat to the untold – and as yet still largely unexploited – riches contained in the seabed.

In the novel’s exhilarating climax Saha discovers that Swim- Fast has been kidnapped by the Thawtes and fights for his release. Swim-Fast tells of a prophecy of a girl who could live both underwater and on dry land, and who would come to help communicate between those two worlds. Saha realises that this is exactly the purpose of her own life.

Andreas Eschbach was born in Ulm and studied aeronautics and space technology at Stuttgart University. His thriller, Das Jesus-Video, was published to widespread acclaim in 1998 and was also turned into a film. His novels Eine Billion Dollar (‘One Trillion Dollars’), Der Nobelpreis (‘The Nobel Prize’), Ausgebrannt (‘Burned Out’) and Ein König für Deutschland (‘A King for Germany’) catapulted Eschbach into the league of top German thrillerwriters for good. His novels for young readers, such as Black*Out, Hide*Out and Time*Out and Das Marsprojekt are published by Arena Verlag. Andreas Eschbach lives in Brittany with his family.

Arena Verlag was founded in 1949 and is one of the most important publishers of books for children and young adults in Germany. They publish a broad range of titles in their fiction and non-fiction lists, including titles for all age groups – from toddlers to young adults. Arena was the first German children’s book publisher to start a paperback programme in 1958. Arena books have won numerous awards and been translated into many languages. They are also the German home of such internationally renowned authors as Cassandra Clare, Roderick Gordon and Brian Williams, Tove Jansson, Steve Augarde, Neil Gaiman and Jo Nesbø.