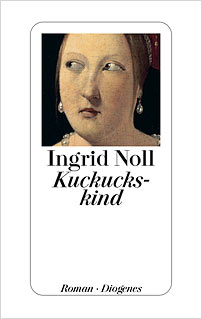 In the opening section of her latest and very welcome novel, Ingrid Noll’s protagonist, grammar school teacher Anja, catches her husband Gernot with another woman. As her relationship disintegrates, she moves out of their shared flat and seeks solace in a solitary world of Soduku. She also begins to suspect that her best friend and colleague, Birgit, may herself have been having an affair with Gernot, and when a child, Victor Augustus, is born Anja finds so little family resemblance between the baby and Birgit’s husband Steffen that she persuades the latter to take a DNA test. When the test shows that he is not Victor’s father, he is unable to cope and arrives at the house which Anja is now sharing with her new lover, Patrick, covered in specks of blood, and mysteriously hands over the baby before driving off.

Anja enjoys playing mother to Victor and Patrick relishes taking on the role of the baby’s father. Yet the mystery of the child’s paternity remains. Anja conducts a secret DNA test and establishes that Gernot is also not the father. It is, however, when she sees a photograph of Patrick’s daughter Lenore as a baby that she discovers the truth. Realising that Lenore and Victor are almost identical, she confronts Patrick with the suggestion that he must have had a relationship with Birgit before he met Anja. He responds by sharing his own fears that Victor is not his son, but his grandson.

The final sections of the novel also see the resolution of the mystery of Steffen and Birgit’s disappearance. Steffen is initially found having been admitted to hospital after a car crash. He takes his own life, leaving Anja a suicide note in which he blames her for the family’s misfortune and confesses that he stabbed Birgit in the argument over Victor’s paternity. Whether or not he actually murdered her is left deliberately unclear.

Despite its stark storyline and its unblinking engagement with the complexities of family life and female friendship, the book is nonetheless extremely enjoyable to read. Laced as it is with delicious dark humour and the author’s trademark strain of seductive irony, it is Noll at her best.

Ingrid Noll was born 1935 in Shanghai, studied German philology and art history in Bonn, and is the mother of three grown-up children. After they left home she began to write crime stories, which all became instant bestsellers. Head Count received the Glauser Prize and is just one of her novels to have been successfully adapted for the screen.