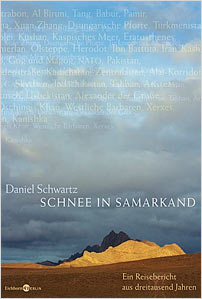 Internationally acclaimed photographer Daniel Schwartz proves himself a masterful travel writer and storyteller par excellence in this beguiling book that should have its place on any adventurer’s bedside table.

In 1987 – 1988 he was the first foreigner to walk the entire length of the Great Wall of China and since then he has been drawn back time and again to those frontier lands where great cultures flourished, bloody wars were fought and the expanse of mountains and of desert became the magnificent and daunting backdrop to the greatness of human spirit and the follies of human nature.

This is his thoughtful and engaging account of his travels and much more. His explorations over some eighteen years have been full of incident and adventure, taking him from the Pamir Highway, along forgotten stretches of the Silk Road, over the Caspian Sea and the Taklamatan desert, and through Afghanistan and Kashmir, politically fraught and dangerous yet so beautiful in their physical landscape. Respectful of the great travellers of the past, Schwartz’s book also offers the reader insights into the writings of Herodotus, Marco Polo, Robert Byron and Vassily Grossman among many others.

Daniel Schwartz, born in 1955, lives in Zurich and is an internationally acclaimed photographer who has worked for many years with the Swiss culture magazine du. The best-known of his books are The Great Wall of China (1991, revised edition 2001) and The Perils, Profits and Politics of Water in South and Southeast Asia (1997), both Thames & Hudson. His photographic volume about Central Asia, Travelling Through the Eye of History, will be published by the same firm in 2009.