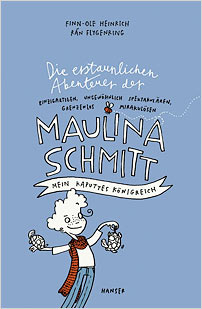 My Shattered Kingdom is a hard-hitting, wittily narrated story with quirky illustrations that are seamlessly integrated into the text.

Twelve-year-old Paulina’s world falls apart when her mum announces that she has split up with Paulina’s dad and that they are moving out of the family home. The only home Paulina has ever known is a great, spacious, messy fourth floor apartment. Every inch of space is chaotically filled with sofas and plants; there are paintings under the tables and newspapers everywhere. It has a creaky wooden floor, a dark, scary attic and a shared garden with a secret den. Her home was her kingdom, her parents her subjects, and it is impossible for Paulina to imagine her life being any other way.

Paulina is sassy, funny, clever, very outspoken and given to complaining loudly if there is something she doesn’t like. She assumes that it must be her dad’s fault that her parents are splitting up and refuses to speak to him anymore. Paulina and her mum move into a small terraced house that feels as if it is made of plastic. The garden is tiny and the walls are covered in funny plastic handles. Paulina hates the new home and misses her friends. Her only solace is her wonderfully eccentric grandad who now lives closer to her. He doesn’t know what is going on between her parents either, but he listens and shares his life’s stories and worldly wisdoms with Paulina.

At school, she decides not to make any friends – the only person who talks to her is tall, gangly Paul, with large, yellow teeth and a smile that looks as if the sun was coming up. It is Paul who explains to Paulina what all the handles in the house are for: it is a disabled-access home. Now the whole design makes sense, but Paulina is worried that they are taking a space that someone else might need. Her mum breaks the news that she has been diagnosed with an illness that will soon make her lose the use of her legs and arms. She needed an accessible home and decided to separate from her husband to avoid burdening him with the role of being her carer. Paulina is deeply shocked but falls back on her considerable inner resources to cope with the huge changes ahead. Young readers can look forward to following Paulina’s progress in the planned sequel to this profoundly moving story.

Finn-Ole Heinrich was born near Hamburg in 1982 and studied cinematography and fine art in Hanover. He has been working as a freelance author in Hamburg (and frequently on trains) since 2009. 2011 saw the appearance of his first children’s book, Frerk, du Zwerg!, which was awarded the German Prize for Young People’s Literature in 2012.

Rán Flygenring was born in 1987 and spends most of her time in Iceland. She studied in Reykjavik, Basle and Berlin and graduated from the Iceland Academy of the Arts. She works as a graphic designer and illustrator in Reykjavik and worldwide. Rán also contributed the illustrations to Frerk, du Zwerg!