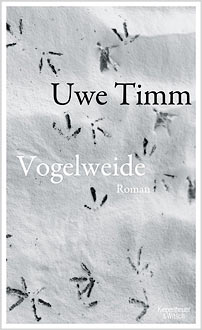 The Bird Meadow is an insightful, self-contained novel which muses on the subjects of desire, morality and justice. This is a quieter work than many of Uwe Timm’s previous works, but no less enjoyable for that.

Christian Eschenbach has lost his IT business, apartment and his beloved Saab to bankruptcy, his wife to a hippie lifestyle in Goa, his daughter to the world of finance and most recently – and painfully – his lover, Anna. Now Eschenbach is spending six months living on a tiny island, a bird sanctuary in the North Sea, where he is filling in as the official bird watcher. And so he observes the birds, follows the tides, writes a piece on Jonah and the whale that he’s long wanted to complete and thinks back on his affair with Anna, a married art teacher, whom he met at a gallery opening.

At their first meeting Anna had been accompanied by her architect husband, while Eschenbach was with his thengirlfriend. The two couples become friends, but he and Anna have a special chemistry that leads them to embark upon an affair. Eventually Anna will confess the affair to her husband, take her two children and leave for the US, just as Eschenbach’s life falls apart. Following his downfall, Eschenbach has a short stint as a statistical researcher on desire but he never believes that it is possible for desire to be measured, let alone predicted. He doesn’t even buy into the algorithmic matches made by internet dating sites. So, five years after his fall from grace, for a lack of better options and the promise of peace and quiet, he comes to the island and lives his monastic life. That’s when Anna calls to announce a visit. They spend one night together and talk, including about Anna’s four-year-old son Jonah, who might or might not be Eschenbach’s. Anna makes peace with him and tells him that she has leukaemia. The novel ends with Eschenbach looking at Anna in the morning light, musing about how the justice that the biblical Jonah demanded from God doesn’t actually exist.

The Bird Meadow is infused with a wonderful sense of calm and has a gentle, forgiving tone. There is a meditative pleasure in following Eschenbach in his daily rituals on the island – drinking tea, and collecting and recycling beached objects – accentuated by Timm’s tersely evocative style.

Uwe Timm was born in 1940 and has worked as a freelance writer since 1971. Uwe Timm was awarded both the Premio Napoli and the Premio Mondello in 2006, received the Heinrich Böll Prize in 2009 and the Carl Zuckmayer Medal in 2012. Except for his children´s books, Uwe Timm´s works have been published by Kiepenheuer & Witsch. Rights to Uwe Timm’s books have been sold to numerous countries. Am Beispiel meines Bruders has been translated into nineteen languages, among them English, Spanish and French.