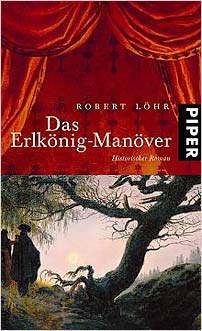 This is a rip-roaring tease of a novel that defies the reader to decide how it should be taken. Its plot is pleasurably topsy-turvy: that Louis XVI’s son and heir did not die in his French Revolutionary prison. Instead he survived till 1805 when he had to be saved from an even worse fate by a drunken and bodice-ripping Goethe. The plot thickens, if that is the word. Zorro (he of the ‘Mark’) isn’t Zorro but Heinrich von Kleist. Kleist’s gay lover is Alexander von Humboldt. Whether this quote-studded farrago is post-post modernism or just rollicking good fun doesn’t matter a hoot. Think Hellzapoppin for highbrows. The latest from the author of ‘The Secrets of the Chess Machine’ .

Robert Löhr was born in 1973 and grew up in Berlin, Bremen and Santa Barbara. He lives in Berlin and in addition to writing is a theatre director, actor and puppeteer. Der Schachautomat (reviewed in nbg – Autumn 2005), his first novel, was an international success.