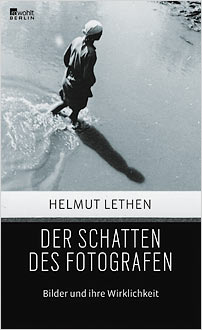 Like many Germans of his generation, Lethen was shocked when, as an adolescent, he learnt about Nazi concentration and extermination camps, and the excesses of the SS during the Second World War. Photographs taken at that time fuel his contemplation of the ‘reality’ portrayed by photography and the bias communicated by the photographer. The photograph on the jacket is a key example: it depicts a woman standing in the water near a river bank, seen from behind. The ‘innocence’ of the photograph is undermined if we know that it was taken in 1942 on the Eastern Front, and that the woman is being used as a human mine detector on the River Donetz.

Through a series of essays, Lethen examines the relationship between reality and the photograph, exploring the works of performance artist Marina Abramovic’ and Marcel Duchamp, the theories of Roland Barthes, Robert Capa’s war photography, exhibitions relating to atrocities in the Second World War and an exhibition in Vienna devoted to Soviet underwear, among others.

That the book was awarded the Leipzig Book Fair Prize this year indicates how highly it is regarded by Lethen’s peers in Germany, and this is certainly a fine book for all those interested in photography and the theories surrounding it.

Helmut Lethen was born in 1939, and is one of Germany’s most renowned academics in the field of cultural studies. He taught at the University of Utrecht from 1977 to 1996 before taking on the chair for Contemporary German Literature in Rostock. Since 2007, he has headed the International Research Centre for Cultural Studies in Vienna.