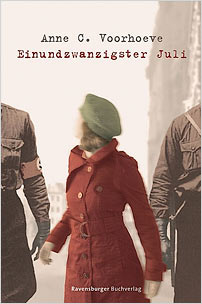 Two quotes serve as a frontispiece to Anne Voorhoeve’s excellent new novel: one from Sophie Scholl, the student resistance leader executed by the Nazis in 1943, and one from von Stauffenberg, executed for his involvement in the plot to assassinate Hitler in July 1944.

Fritzi Bredemer returns to the family home in Berlin-Charlottenburg, a neighbourhood in ruins, after two years in East Prussia, where she had been evacuated with other children to ensure their safety. There she had been educated in Nazi ideology and is now a committed, idealistic member of the BDM, the Nazi youth movement. Soon, however, she recognizes that her family are living by quite different standards – could her mother, a former aristocrat, even be working for the Resistance? Sent on then to stay with other relatives in South-West Germany as the devastation in Berlin continues, Fritzi learns to question all she has known, believed in and felt.

From the first page the reader is plunged into the thick of the exciting action. The conflicting feelings of this teenage girl, longing for her mother’s love and approval, her experiences of the horror of war and her realization that there are other values than those she has so far been taught, are sensitively portrayed and the details of life in Germany during the final year of the war are fascinating. A suspenseful and thought-provoking novel from an assured and practised hand.

Anne Charlotte Voorhoeve was born in Germany in 1963. She read Political Science, American Studies and Ancient History at the University of Mainz and Comparative Literature at the University of Maryland. She has worked as a newspaper and book editor and a public relations consultant for a Lutheran monastery. Since 2000 she has been a full-time freelance writer.