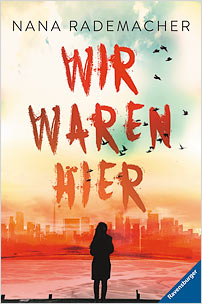 It is 2039 and Europe – perhaps even the whole Western World as we know it – lies in ruins following several years of an inter-state conflict which has now evolved into civil war and military rule. Fifteen-year-old Anna lives in a devastated Berlin where water, food and power are only intermittently available; people are living in the ruins of their homes and her parents – starving, freezing and desperate – are retreating into themselves. Self-preservation has become the order of the day and lawlessness prevails.

Anna yearns for a return to normality and records her thoughts and dreams on a blog which she dangles beneath the noses of the web police. Via her blog she meets Ben, and the two fall in love and end up joining the gangs of feral children eking out an existence underground in the U-Bahn tunnels, eating rats to survive. Ben is not all that he seems, however, and Anna has to work out just who you can trust when everyone is, out of necessity, out for themselves.

We Were Here is a thrilling read in our increasingly volatile and unpredictable world. Teenage readers will readily identify with Rademacher’s strong and believable female protagonist.

Nana Rademacher was born in 1966 and studied social pedagogy in Bielefeld before working for NDR (Norddeutscher Rundfunk) in Hamburg as assistant director and editor. Since 2001 she has been working for the Südwestrundfunk in their audiobook, feuilleton and music departments.She lives as a freelance author in Stuttgart.

Ravensburger Buchverlag was founded in 1883 by Otto Maier and publishes children’s and young adult books for all ages. The blue triangle is a guarantor for products of high quality. Ravensburger publishes storybooks for small children, books for first readers, and children’s nonfiction. They publish around 450 books per year, and more than 1,900 titles are available.