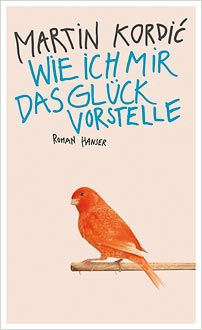 Martin Kordć’s impressive debut is set during and after the Bosnian War and is narrated in a series of notebook entries written by an eleven-year-old orphan called Viktor. Viktor is a breech baby who is delivered by his grandmother using a knife and a meat fork. He is born with a deformity – his spine so twisted that he has to be strapped into a special corset – and is also thought to be slightly brain-damaged. When war breaks out Viktor’s family are forcibly relocated from the Muslim side of the city to the Christian one, and he becomes separated from them. He never sees his family again, and so begins a journey that takes him to an orphanage in the mountains, then back to the city and on to the sea, where his story ends.

Viktor spends some time in the orphanage before gravitating back to the city where he settles into a life amid the rubble with a stray dog and Dschib, a very ill black boy who only has one leg. The boys survive by robbing graves and cleaning a bar. Kordić softens the brutality of his story with accounts of Viktor’s instinctive generosity and kindness: one night he rescues a young girl from the bar where she has been prostituted and badly beaten. Viktor places her in a cart and wheels her to the abandoned zoo where he was once greatly impressed by the elephants. The girl has always delighted in his stories of the elephants and chooses to remain in the peaceful place when she comes round from her ordeal. When Dschib disappears one day, Viktor sets out with his dog for the sea, and his story ends with him abandoning his notebook, taking off his clothes, and walking out into the water.

The immediacy of Viktor’s present tense narrative and its disjointed chronology lend the story a feverish, fairytale quality. Viktor is an original and engaging character who is both resourceful and astute in his observations. His voice, removed from its historical context, might be compared to that of the lead protagonist in Mark Haddon’s The Curious Incident of the Dog in the Night-Time. Kordić’s novel also has echoes of Saša Stanišić’s highly successful How the Soldier Repairs the Gramophone, and is likely to strike a similar chord with US and UK readers.

Martin Kordić was born in 1983 in Celle and works as an editor in Cologne. He studied at the Institute of Creative Writing at the University of Hildesheim and went on to study at Zagreb University.